The Economic, Social and Health Impacts of Pineapple Production in Costa Rica 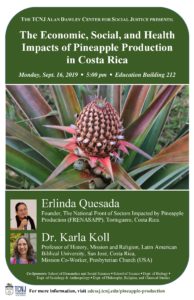 Celebrating our award and scholarship recipients at COSA 2019:

Christopher Loos, recipient of Mort Winston Scholarship for Study Abroad this year, presented his study abroad experience in Peru at the Celebration of Student Achievement on May 8.  On the same day, Alexandra Mallinas, this year’s winner of Alan Dawley Prize, was presented the certificate of the award by Dr. Rebecca Li. The simple ceremony was attended by some members of the Center’s steering committee, Dr. Susan Ryan and Dr. Christopher Fisher, and Dean Wong of Humanities and Social Sciences. 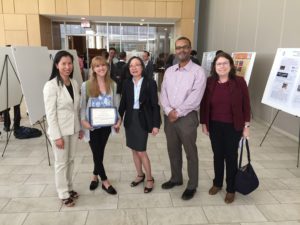 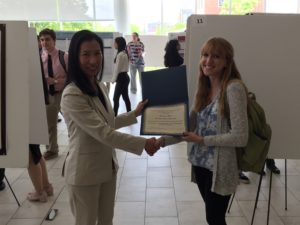 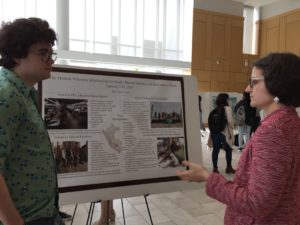 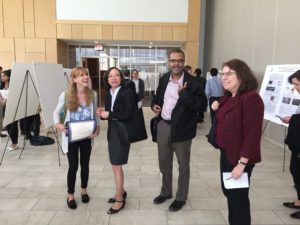 Thursday, April 4th, there was held a series of events hosted by ADCSSJ with Patricia Hill Collins discussing intersectionality and social justice.

View all photos from the events here. 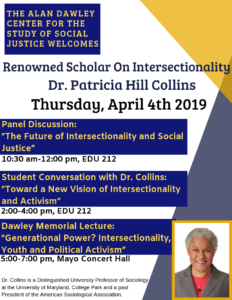 Panel discussion: “The Future of Intersectionality and Social Justice” 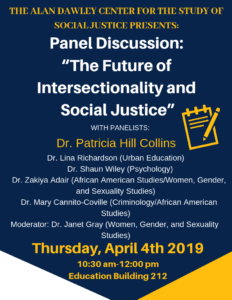 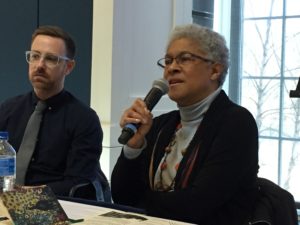 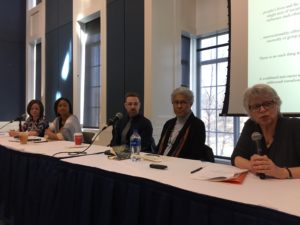 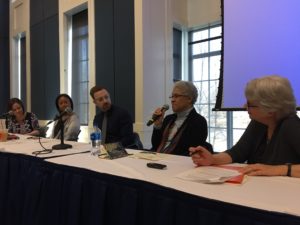 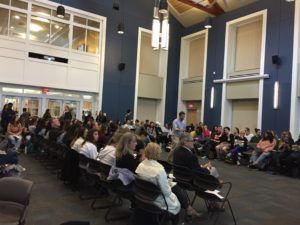 Student Conversation with Patricia Hill Collins: “Toward a New Vision of Intersectionality and Activism”

From 2:00-4:00 pm, in the Education Building room 212, approximately 30 students were invited to attend the conversation on issues of intersectionality and social justice. These students read two essays by Collins from her book, On Intellectual Activism, “Toward a New Vision: Race, Class, and Gender as Categories of Analysis and Connection,” and ” Where Do We Go From Here?”, and articulated some questions based on their reading in preparation for the discussion. 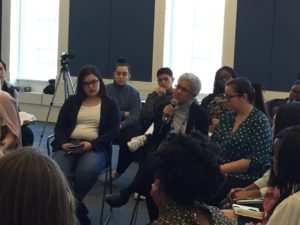 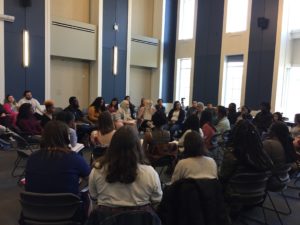 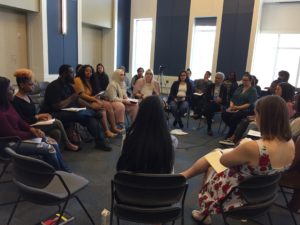 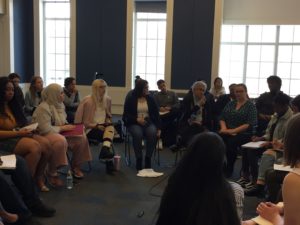 From 5:00-7:00 pm, in Mayo Concert Hall, a lecture by Patricia Hill Collins where she brought “an intersectional analysis to bear on the question of how generational experiences articulate with political action”.  The lecture was open to the public. 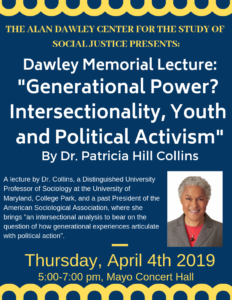 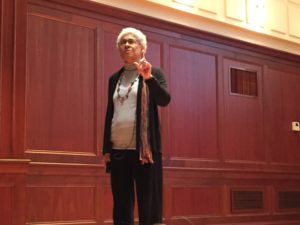 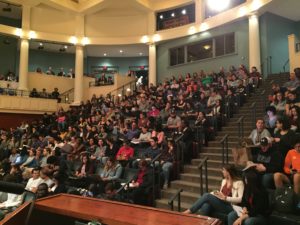 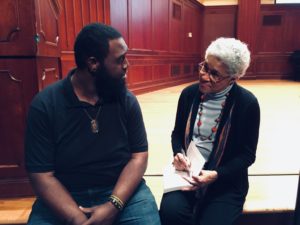 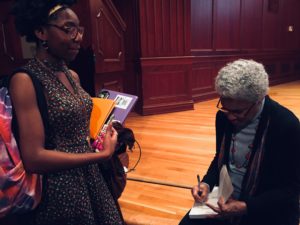 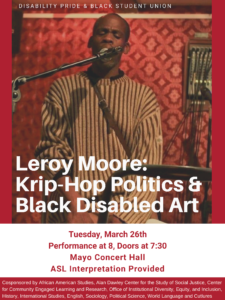 Who Will Write Our History, Showing and Q&A

On March 6th at 12:30 pm in the Library Auditorium, ADCSSJ co-sponsoried a showing of Who Will Write Our History, followed by a Q&A. In this film, led by historian Emanuel Ringelblum and known by the code name Oyneg Shabes, a clandestine group of journalists, scholars, and community leaders in the Warsaw Ghetto vowed to defeat Nazi lies and propaganda not with guns or fists but with pen and paper. Now, for the first time, their story is told in the documentary featuring the voices of three-time Academy Award® nominee Joan Allen and Academy Award® winner Adrien Brody. 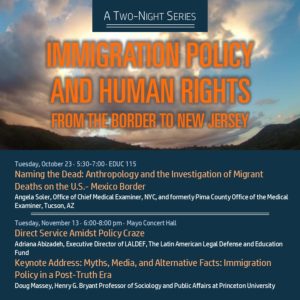 On October 18th, the ADCSSJ faculty gathered for dinner and attended a showing of Clybourne Park, performed at TCNJ’s Black Box Theater.  The Center co-sponsored the event in support of Shakespeare ‘70s, a community theater company who has performed at TCNJ for many years. This play discusses the themes of racial segregation and gentrification. Professor Rob McGreevey, a member of the Center’s steering committee,  was one of the panelists in the post-performance talkback. 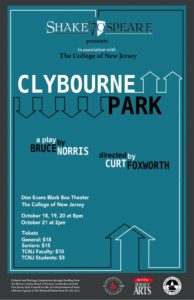 On October 3rd, the Alan Dawley Center for the Study of Social Justice hosted Social Justice Day. Faculty in departments from all seven schools got together to share their social justice work, brainstorm ideas for social justice initiatives on campus, and identify opportunities for collaboration. In an afternoon of paired discussions and breakout groups, participants discussed the importance of seeing the interconnectedness of social justice issues instead of reproducing silos and shared ideas of how to integrate this approach into our pedagogy.  Many participants made plans to collaborate in future initiatives. All participants will be included in the newly established social justice discussion group on campus to continue the conversation. 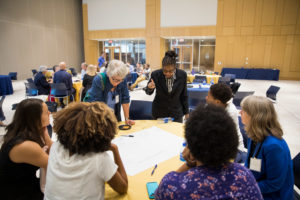 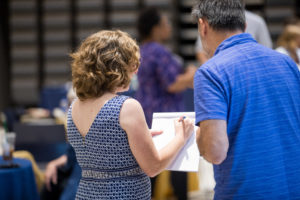 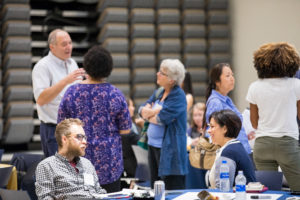 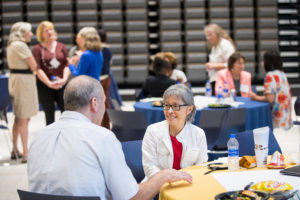 At the Celebration of Student Achievement on May 2, 2018, Dr. Rebecca Li, Director of the Alan Dawley Center for the Study of Social Justice, presented the certificate to Nicole Athan, the winner of the Alan Dawley Prize in 2018.   Nicole is a Sociology Major who will be graduating this month.  Her research paper “The Relationship between the United Nations, European Union, Italy, and “Mondo Donna”: Working with Women who are Victims of Sexual Exploitation” reported the research she conducted as part of a social justice study abroad program in Italy.  She presented her research at the poster session, you can view her poster here:

Dr. Shiva is an internationally renowned advocate for food justice and biodiverse agriculture. Trained in quantum physics, she became involved in environmental research and grassroots activism when she witnessed the environmental harm caused by monocropping and pesticide use in her home region at the base of the Himalayas.  She founded and directs Navdanya, an organization that protects biodiversity and promotes organic farming based on the traditional knowledge of rural Indian women.

A leader in the movement to build international networks among groups most marginalized by global economic forces, Shiva advises governments and organizations globally, including Women’s Environment and Development Organization and the Asia Pacific People’s Environment Movement. Among her awards are the Alternative Nobel Prize and the Sydney Peace Prize.  She has authored more than 20 books, including Water Wars: Privatization, Pollution, and Profit (2002), which addresses the political implications of increasing resource scarcity; Earth Democracy: Justice, Sustainability, and Peace (2005), a framework for environmental justice; and Soil Not Oil (2008), which champions small, independent farms as a foundation for food justice.

Biotechnology and Food Justice: The Case of GMOs Panel Discussion on April 12 from 11am-12:30pm at Education Building 212

The Dawley Center is sponsoring a panel discussion held on April 12 from 11 am-12:30 pm at Education Building 212. Dr. Vandana Shiva will be responding to perspectives on ethics and innovation from the Department of Biology and the School of Business. Please contact Dr. Janet Gray (gray@tcnj.edu) with any questions. We encourage you to read diverse perspective on Shiva’s work – check out the links below. Please contact Dr. Gray if you would like PDFs of any of the references. We look forward to a lively discussion.

Whitney Dow will be giving a presentation about his “Whiteness Project” on February 15th at 5 p.m. in Education 212.  Dow is an award-winning documentary filmmaker whose current focus is on the Whiteness Project, a story-based interactive media and research project he is producing in collaboration with Columbia University’s Interdisciplinary Center for Innovative Theory and Empirics (INCITE). The project, which will ultimately include 1,000 subjects from communities across the United States, examines how Americans who identify as “white” or “partially white”, process their ethnicity, and pairs it with secondary quantitative data — attitudinal, socioeconomic and genomic — collected by a team from INCITE. Dow and his work has been featured in dozens of broadcast networks, radio, print and online publications including NPR’s All Things Considered, CBS This Morning, The Oprah Winfrey Show and as a regularly appearing commentator on MSNBC’s AM Joy.